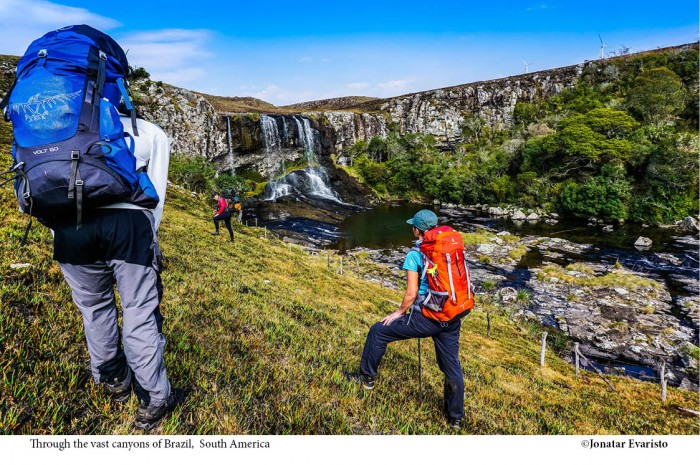 Unforgettable experiences in this especial part of Brazil, known as the Land of Canyons

Jonatar Evaristo
*Trails housing deep crevasses and crystal clear rivers lead adventurers from throughout the world to unforgettable experiences in this especial part of Brazil, known as the Land of Canyons.*
On that sunny afternoon, during the entire return trip to Bom Jardim da Serra, silence and exhaustion hovered like a bird in the permanently dusty air of the Land Rover Defender 110. The guides, Tiago and Luciana, sat on the trunk’s leather seats, with Cláudia and the couple, Alexandre and
Christiane, ahead of them. I still couldn’t believe I did what I did. Could not believe it.  We’ve crossed 93 kilometres, on foot, through the vast canyons of South America, between the states of Santa Catarina and Rio Grande do Sul, in the southern part of Brazil.
Precisely eighty-two hours before, that is, at 7 a.m. on thursday, it was one of those fiercely hot and sunny morning one at times sees on the Santa Catarina mountain range. Even there, at over 3.600 feet, inside a room with heavy wooden walls that seemed to absorb each and every lúmen of light, one
could feel the heat that soon would press upon the adventure. The house faced east, making the sunlight unbearable.
I woke up to the humdrum of people talking and the smell of burning firewood, wet clothes and hot mate - a brew peculiar to the cultures of southern South America, inherited from the indigenous cultures. The realities and uncertainties of the crossing soon would take out of this state of ecstasy and exaltation. The first and the main question was: would I endure the harsh trek? When we arrive at the southern highlands, our until then broad road would begin to branch in trails. We were in a wind
swept plain, covert by a carpet of green and the contact with it felt odd and foreign to my feet. After travelling a few kilometres, or even some hundreds of metres, we saw the first observatory: the Cânion da Ronda.
For a long time, we followed our instincts, choosing the paths that lead south (therefore, toward the Cruzinha Montenegro, Coxilha, Boa Vista, Realengo, Amola Faca and, after crossing to Rio Grande do Sul, Rocinha canyons), but we would still face several kilometres before completing the entire course.
The trail wouldn’t be restricted to the nearly 94 kilometres between the cities of Bom Jardim da Serra and São José dos Ausentes, in the Rio Grande do Sul countryside. It was also an adventure to an area of Brazil with fewer tourist spots than the coastal regions. The varied weather in the region - shifting between cold nights and pleasant afternoons - in this local micro-climate favours the cultivation of fruits such as apples, pears and raspberries. Between the months of november and february, the farms are
filled with trees loaded with them. But the prize goes to the winter months, that go from june to september, when temperatures as low as - 16o Celsius are common at dawn and it sometimes snows. And, even more, it is extremely possible to see new cultures and monumental views.
And to know all those places, we would still have to travel, in average, between 20 to 27 kilometres per day. For the following days, I went trekking behind the guides, Tiago and Luciana, camping in places with the most exclusive and unknown scenery in the country.
In São José dos Ausentes - our final destination - the adventure took a different pace. Among the options visitors have in the city, is the Sítio Vale das Trutas, one of the most beautiful places in the gaúcha mountain
range. And it was so that, for four days among the giant araucárias and deep gorges, I saw myself in one of the greatest adventures of my life, south of a beautiful country called Brazil.
*SERVICE: *
Where to stay:
Camping da Ronda: The crossing’s starting point is at the top of the Rio do Rastro mountain range, within the Bom Jardim da Serra Wind Park, in Santa Catarina. Daily Rates starting at CAD 8. Contact through phone # (+55) 49 9.9111-9808
Sitío Vale das Trutas: Final destination of the crossing, the hotel-inn is the perfect place to have an adventure or to rest with nature. Besides that, it offers an irresistible gourmet menu of the southern Brazilian cuisine. Contact through e-mail This email address is being protected from spambots. You need JavaScript enabled to view it. or by phone (+55) 54 9.9657-7712
Guides:
Clube Trekking Santa Maria RS: Offers tours and crossings with all levels of difficulty, such as from the Cruzinha Canyon to Rocinha Canyon (CAD 160 per person, 55 kilometres) and harsher trails, of up to 250 kilometres (Morro da Igreja to Serra da Rocinha, CAD 320). Contact by e-mail at This email address is being protected from spambots. You need JavaScript enabled to view it. by phone at (+55) 55 9.8407-1646 or (+55) 553317-3400
How to get there:
The airport closest to Bom Jardim da Serra is in Jaguaruna, 160 kilometres from Florianópolis, Santa Catarina’s state Capital. To get to the Ronda camping site, one can go through the Rio do Rastro mountain range, by the SC-390 motorway - one of the most fascinating roads in the world, with 284
turns - or go by bus, with the Nevatur Transport e Turismo company. Contact by e-mail at This email address is being protected from spambots. You need JavaScript enabled to view it. or by phone at (+55) 49 3223-0652.
Jonatar Evaristo
*Journalist :: Photographer :: Filmmaker*
​Freelance :: Special Reports
p: +55 47 3029.0845  m: +55 47 98858.7667
a: ​Joinville city, State of Santa Catarina - Brazil
w: jonatarevaristo.wordpress.com  e: This email address is being protected from spambots. You need JavaScript enabled to view it.
5.0/5 rating (2 votes)
Tweet

We have 89 guests and no members online