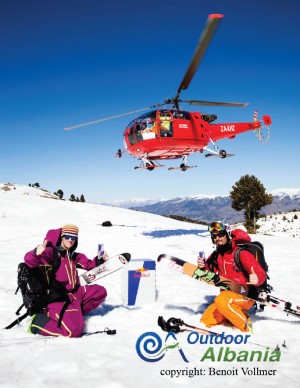 A small change of plans

In fact, the title should be 'Heli Skiing in Valbona', as this experience was predicted to occur as part of V-free activity (Valbona Free Ride Experience) in Valbona, where from about three years, Outdoor Albania invites the best skiers in the world to explore and ski and snowboard the vertiginous sliding slopes of the Albanian Alps after climbing them with the challenging ski-alpinism techniques.

This year, Red Bull Albania, with the dynamism that characterizes it, decided to support us through the "give us wings" by sponsoring a day of helicopter flights - guarantees strong emotions and pictures of high quality from the air.

The technical part of the flight will be possible, by the Unit.

As a result of heavy dense snow in February and the negligence of local authorities, the road remained blocked in Valbona for weeks, forcing participants to walk about 18 km to ski standing heavy bags in the back by Dragobia to field of livestock to arrive at the hotel with the same name, where Mirash Lamthi hosted us for ten days, making us not missing anything, although the blocked road.

Days and adventures in Valbona deserve a separate article, and should normally finish with a day use the helicopter for clinging to mountain peaks and spectacular long realized slipping. But the helicopter departure from Tirana needs to be supplied with special fuel, and the absence of the road can not transport it in Valbona. In these conditions, we decided to achieve, helicopter flights to Mount Tomori, where the access was possible for fuel, and forecasts indicate an optimal flight time. Tomori simultaneously offers a wide field of wonderful skiing, which could hardly expect to use it.

So, we left behind the craggy peaks of Valbona and after a journey that began with ski walking, went with 4x4, then the "Path of the Nation" and further in Tirana and Berat, arrived in town of Polican, then stopped in the street pleasantly refurbished in central entertaining. Here we were were welcomed by Mr. Zotka Adriatik - the city's mayor, who wished us welcome, fortunate expedition, and showed us that the previous day had cleared for the road from miles of snow, specially for us, so that we and the fuel that we had with us had location near Bora water plant, which will serve as the basis for the mission. After being relaxed a little bit, we looked back across the road that winds Tomori western slopes and quarries that are pieced a sacred mountain side, who endures pain in silence, in a long agony.

Upon arriving in pastures, while ignoring the accumulated fatigue, bracing for clinging to the ridge in order to choose and for helicopter’s landing place. The afternoon sun that is immersed in the west by the peaks in the pink coloring, arrived at the crest of the Tomori where we appropriated two landing sites, at the peak, in the which we set flags to indicate the strength and direction of wind.

At the top we expected a pleasant surprise that made us smile: fresh ski tracks shortly discovered that they belonged to Dag,  a Norwegian missionary companions for years, who was enjoying a walk with ski screams of discipline Telemark (free heel always stays) in the afternoon sun.

It was greeted with Dag, and appreciating the sun from the West glamor of Abbas Ali tomb built on top of the mountain. Then we decided to head lamps with battery and started the exciting downhill skiing in complete darkness under a dome twinkling stars, as can only give a clear night with no moon.

6 o'clock in the morning, along with my friend Fab - Telemark skier from Chamonix, we headed back to the top, where we arrived after two hours the driver to signal that everything was fine, and almost no wind blowing at all. Visibility was 100% and from the crests we could whatch the horizon, the Adriatic Sea and the island of Sazan.

Otherwise, if the wind was strong, the situation becomes extremely dangerous, as the vehicle has to be raised and falled in a "handkerchief"  of land on the ridge, steep slopes along the eastern slopes of Tomori. After about half an hour, the red helicopter , Navy’s part of the Ministry of Health began to make noise disturbing the circuses of Tomori. Gag and me, run away carving the snow with curves, and opening paths on the unexplored  snow, penetrating rapidly through the pine forests that were separated from the paddock.

The helicopter landed softly and gentle, in the marked circle, turned off his engine and the staff came out, together with our friend Benoit Vollmer, the  French photographer who had flown with them from Tirana. Pilots under the direction of Albert Xhafaj the master, seemed to share the same enthusiasm with us on this adventure, and after a technical explanation of security conditions, the ski carriage began to peak.

It is really a wonderful tool, and a free ride skier, his sense of exit cut on a ridge of craggy getting skis from side basket while screw continues to roar, is an indescribable thrill.

After the six of us were in top, we shared the lines and rained scroll speed in the spacious ground which can optionally interpret free as it descends, in a magical scene.

Photos and footage will produce a series of articles and documentaries that will make known to the world Europe the Albanian beauties of nature and the endless possibilities that exist to exploit them.

If Albania was a European country (not only by geographical notion), I am sure that the mountain of Tomori and especially his north-east slope, would be great house of ski for Albanians, with a resort that could have envy the alpine countries of Europe in terms of terrain, snow quality and sustainability.

This mountain in a very small distance from the capital airline can satisfy skiers of all Albanians, who are directed the absence of Ski resorts in neighboring countries, and even attract foreign tourists.

I think it is time that these considerable funds spent every winter weekend stay in Albania for the development of winter tourism really, because Tomori needs only a little way and some lifts - as the super modern and quality of Dajti mountain , which transports daily with thousands of people mostly in cafes and restaurants.

Hopefully the photographic and film materials that have accumulated somehow serve this purpose because Baba Tomori deserves to turn quickly into a sanctuary of ski and nature lovers rather than be slowly sold in pieces as ornamental stone.

We have 95 guests and no members online